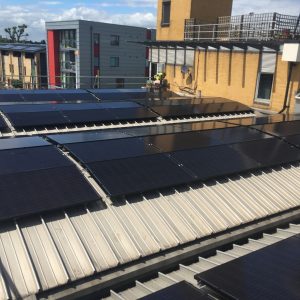 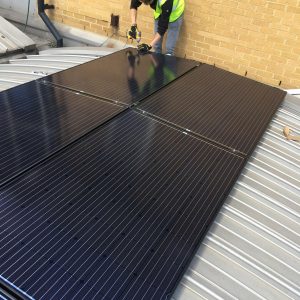 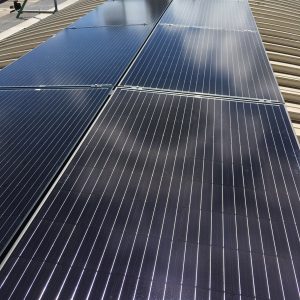 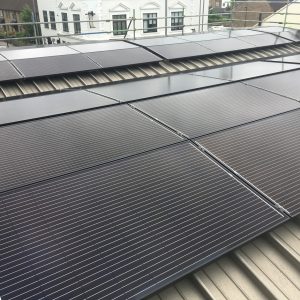 In June 2017, Revolution Energy completed a 28.42kWp installation at LFB Leyton for Imtech Inviron as part of a secured RE:FIT Framework agreement. This is the first follow on from the five initial sites completed in 2016/early 2017.

The Scheme will generate an estimated 25,200kWh of energy per annum of which 100% will be consumed on site.

Solaredge inverters and optimisers were used to make the most of the tight roof space and maximise yields. Their products allow for module level monitoring and in this case minimised any shading losses from the tight roof space. In addition their products negate the losses associated from module mismatch. This can come from manufacturing tolerance, soiling (dust, snow, leaves), temperature differences and partial shading. Over time PV modules also degrade at different rates adding to energy losses over the years. These are all eliminated with Solaregde.

Their superior safety features, with SafeDC, meant they were the perfect solution for the Fire Stations. Unlike conventional string inverters with loss of mains power the system drops to a safe DC voltage of 1V. This meets the highest German and European Safety Standards (VDE 2100, IEC 60947). The product is approved for use on LFB sites for this reason.

Solaredge inverters also comply with the UL1699B arc detection standard designed to mitigate the effects of some arc faults that may pose risk of fire.

The PV systems are connected to an AMR metering solution allowing for remote and centralised monitoring and collection of FIT payments.